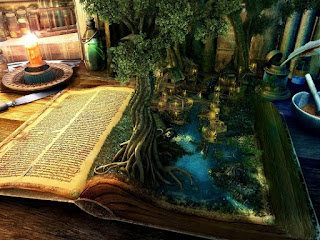 On the third day the younger brother decided to go to the palace. He filled his basket with apples and left. On the way he met the same strange dwarf who asked once again what he had in his basket. The young man replied that he had apples for the princess so that she would heal, and the dwarf commented that as he was saying then so it would be. When the young man arrived at the palace he gave the apples to the princess and as soon as she ate the first one she immediately felt better. The King's gratitude was indescribable and kept his promise. So the younger brother married the princess and the two lived happily.
---------------------------------------------------------
Language is a shaping force in the field of vibration. All manifested universe is the gradual unfolding of a primordial vibration, a first sound - the well-known Aum according to the oriental cosmogony traditions.
The energy structure of the man is a complex tool that has the ability to tune in to all the qualities of the universe. The energy center of the throat (otherwise 5th chakra) is the key to the creative power of speech.
Through the words we create vibrations. Words are powerful tools that shape through the vibrations which create our entire existence. They contain both semantic and energy messages through the vibration they carry, so it is not only the verbal message but also the qualitative vibration which the 5th chakra emits in order to support the message. Many people may feel that they express themselves and say what they need to communicate but they finally realize that it is like "talking to a brick wall." They are not heard because the message which underlies their words does not support what they want to succeed. Often, what they receive from the recipient is exactly the opposite, because vibration is much more essential in our interaction than the exact words. For example, a teacher may think that he has set limits on his students by explaining verbally the rules of the class, but if his energy body emits lack of respect, insecurity, weakness and unreliability, his students will read the second message and most of the times they will reflect it back, informing him at the same time about what kind of information he carries and externalizes without realizing it.
Words have the power to cause within the individual the quality of their vibration and the reality they represent. Through the words we use we define our dominant vibration and thus shape our entire existence. Therefore, we have to pay close attention to our words because sooner or later they will affect our inner truth and reality.
The expressional vocabulary of someone is directly related to his level of consciousness. It is no coincidence that people with a high level of consciousness use clear, sophisticated, accurate and beautiful speech. By contrast, people of low level of consciousness use verbal stereotypes, a "popular", coarse language that lacks expressive precision and elegance. The use of ugly words, even if this is done automatically, awakens low vibrations inside us and builds negative characteristics - their accumulative influence is very significant even though we do not realize it.
The word builds universes. With the word we build and define our world.