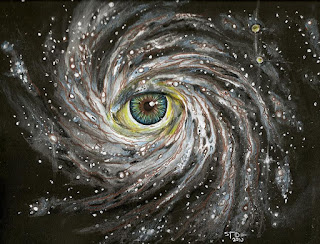 Consciousness is the connecting glue which draws together everything in the universe. It is the instrument through which we communicate with the outer world. There is an entire energo-informational field of which we make part, we are connected and interact with. The meaning of the existence of information is fundamental since it is information which pushes the universe towards evolution. When a disorder of this communication is caused, we eventually arrive at imbalance, which can be exhibited to the man as disease. According to quantum physics there is no absolute vacuum; where we once considered there was emptiness we now know that some kind of activity is being done. We also know that time is not a linear course but consciousness is the one which creates the impression of the linear flow of time. Universe is governed by non-local connectivity which is nonetheless precise and rapid.

The first stage of the descending route of the unexternalised Word is Adi field, where the three aspects of it, Shiva, Vishnu and Brahma, or Father, Son and Holly Spirit are being expressed. Next field is Anupadaka, where it undergoes the first restraint and its facet as First Word is inactive. During the next stage it undergoes another limitation and only the Third Word can be manifested at the Nirvanic field. In the latter it is exhibited as a triple expression of Atma, Buddhi and Manas. In this field, the Triple Monad is a miniature of the Word, a representation pretty much the same with the icon of its creator. As soon as it descends from the Nirvanic field, it undergoes a new limitation and its aspect of Atma is covered; only Buddhi and Manas are being expressed. When it reaches the mental field it undergoes another restraint and only the facet of Manas appears at the higher mental field. Consequently, what is left, that is Ego, being a part of the Word right from the beginning, descends to incarnation and goes through new limitations while forming consecutively the mental, the astral and the physical body.

The development of consciousness is exactly this reverse, upwards route, the liberation and realization of all hidden energies. We perceive the world three-dimensional because this is the cognitive system we have until now developed. If an object with e.g. four dimensions is presented to a creature which perceives only three dimensions, this object undergoes a limitation and is perceived as three-dimensional. The same thing happens with the Word. 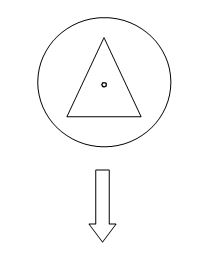 Every man functions on a different level and has therefore different degree of consciousness. There are people who pop in and out the nirvanic field and others which have only evolved until the astral body. The man who enters the nirvanic field needs no more to incarnate, he has liberated from the cycle of the consecutive incarnations called samsara. Few are those who have developed their lower mental body and even fewer those who have developed the upper mental body. Developing until the causal body, which comes next, would mean to reach philosophical intellect. From then on the visionary experience of the world begins.

The levels of consciousness correspond to the chakras and the bodies they form. With his physical body man experiences the three-dimensional world. The man who has fully developed his third chakra and mental body functions on the corresponding level. Immediately afterwards comes the person who has opened his heart and experiences the vibration and the creative power of universal love. A more advanced person has such pure aura and so activated his upper chakras, that perceives differently his essence and his relation to the “Whole”. The distinction between the levels is clear and rather rigid according to energetic hierarchy. The so-called hells are the extremely low levels where a soul can be introduced after repeated incorrect attempts of development and remain there. The development of humanity will come when all will be able to function in the nirvanic field. Man is spiritual essence which obtained physical body. So we should cease to identify ourselves on our physical body only and realize the supreme essence of our existence in order to proceed to the upward, energetically evolutionary path, and finally achieve our fusion with the fountain of creation. One should keep in mind that the aim of the creator is to bring harmony through chaos and that it is impossible for someone to move against the plans of this primal creative force. Man is its creation and result and as such he owes to move as determined in order to develop smoothly.